Gymnasts Who Over-Think Their Skills 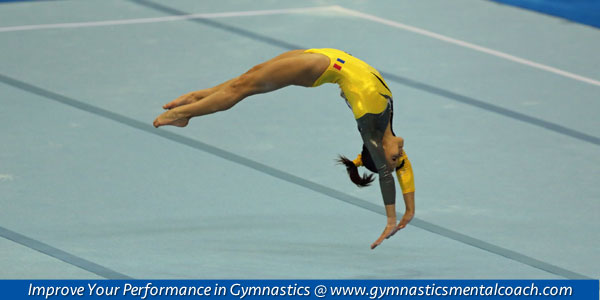 Do You Overthink When Performing?

Over-thinking in competition can completely impair a gymnast’s performance. Gymnasts are coached everyday to think about form and technique, but there’s a difference between improving your technique in practice and over-analyzing while performing.

Over-thinking is an unproductive process, which is exacerbated during stressful competitions.

Over-thinking creates a lack of trust in your skills, which physically inhibits gymnasts from performing at peak levels. Over-thinking is a result of fearing what might happen and being trapped in a training mindset.

The goal of performance is to allow it to unfold according to an athlete’s training with minimal conscious thought.

Marissa Petra King is an English gymnast who understands the detrimental effects of over-thinking.

King represented Great Britain at the 2008 Summer Olympics in Beijing, China, and competed at the 2007 and 2009 World Artistic Gymnastics Championships. King currently is a senior on the University of Florida gymnastics team. King is the 2011 NCAA vault champion and 11-time All-American.

King identified over-thinking as the culprit for her inconsistent performances:

“In elite (international competitions) I didn’t really think about it, I just kind of did it. But in college you have more time to think about what you’re doing, because you are doing fewer skills since the requirements are different. I feel that I think so much more about my skills and routines in college than I ever did in elite… I never thought about anything as much as I did in college.”

King further highlighted the differences between performing and thinking while performing:

“There was one meet at Georgia, where I messed up on beam. I had hit [my routine] all week and I didn’t know why I was messing up on beam this season… I couldn’t understand why I was messing up, when all the time in the gym I was hitting. It was frustrating, but I had to get that mentality back, that mental toughness. I’ve been in gymnastics so long that it’s not about the skills, or whether or not you can do it. It’s about whether you train yourself mentally and prepare yourself to do what you need to do.”

As King concluded, you can combat over-thinking by training yourself mentally to control your focus.

Here are some tips to manage over-thinking during competitions: