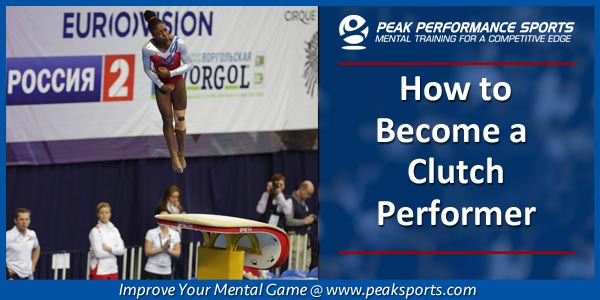 How To Get Past Your Fear And Become a Clutch Performer

Why is it that some gymnasts can perform relatively flawlessly in practice but cannot seem to replicate that type of performance in competition?

This dilemma has haunted many athletes throughout the decades.

Maybe you are going through that very experience where some sort of mental block prevents you from executing when it matters most.

Perhaps you consider yourself a practice performer rather than a clutch competitor.

Or maybe you have labeled yourself a “choker” because you can’t handle the pressure.

There is good news though…

No matter what you may think of your ability, if you can execute a routine in practice, you most certainly are capable of producing the same level of performance in competition.

The culprit that holds athletes back from performing up to ability is called “fear.”

Fear is that annoying voice that tells you all the reasons you cannot shine on the big stage even though you can perform successfully with regularity during practice.

If you change your mentality or the way you see things, you will be able to fully commit during a routine resulting in greater and more consistent performances.

Donnell Whittenburg performs some of the most daring vaults in the sport of gymnastics that have made him a legitimate medal contender in the 2016 Rio Olympics.

Whittenburg plans to compete using a vault that has the second highest degree of difficulty. The vault is called a Ri Se-gwang and only three other gymnasts in the world have performed it in competition.

When performing a vault that requires a high degree of strength and ability, you have no room to second guess your ability to pull off a successful attempt…

You must trust your ability and training by understanding the equipment and apparatus are standard.

The only difference between practice attempts and attempts in competitions is within your mind.

Whittenburg has trained this vault over and over to the point of nailing this vault consistently in practice.

WHITTENBURG: “The first time I tried it, I didn’t know where I was. You just flip through the air and hope you spot the landing at some point… It’s a very high-risk vault. You have to really commit to it.”

It’s buying into fear that prevents you from going “all in,” but if you don’t fully commit, that little bit of holding back will dramatically detract from your performance.

Whittenburg fully believes that if he commits to his vault, he can medal in the event at Rio.

WHITTENBURG: “I know if I compete well and execute all my routines. I can be up on the podium, for sure.”

That level of commitment has the side-effect of increased confidence and who couldn’t benefit further with an extra dose of confidence?

Try this tip to become a “clutch” performer:

Entertain no thoughts about what if… Tell yourself:

“This is no different than practice. The dimensions are the same, the equipment is the same and I’ve landed this routine so many times.”

Hit your normal routines in you do in practice, no more! Too many gymnasts try to hit their very best routine in competition and this leads to trying too hard or being too perfect with your performance.