Getting Past Mental Blocks In Competition 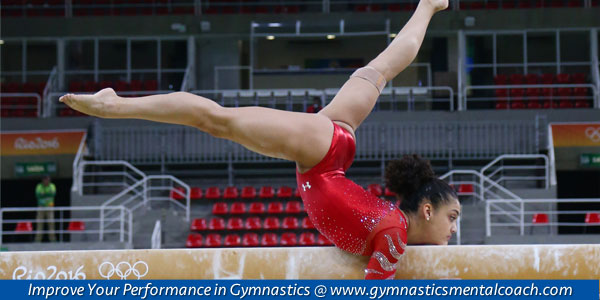 Many gymnasts–we work with at Peak Performance Sports–often have difficulty performing their skills freely in competition (compared to practice).

If this sounds familiar to you, you always have doubt going into competition. This causes you to be hesitant to take risks in competition.

In some cases, gymnasts become so overwhelmed that they freeze and are unwillingly to compete in the event at all.

In order to get to the next level in gymnastics, you want to move from intermediate skills to advanced skills… and then hit them in competition.

COACH: “I coach an athlete who competes at the national level in Double Mini Trampoline. She really needs the double back in order to progress to the next level but cannot link into or out of them and, hence, we are unable to use them in a routine.“

COACH: “She just says she cannot let herself go for it and that she doesn’t know why. This starts to make it worse and worse and then she won’t even be able to do the double back on its own. To my knowledge she has never hurt herself doing this skill and she has never actually missed landing it. I don’t know how to break down the barriers she is creating as she just says she doesn’t know why it scares her.”

Can you identify with the experience of this athlete?

BUT during competition, you can’t seem to let yourself go and present the skill. And worst of all, you don’t know why!

It all boils down to fear…

Fear not based on logic is the problem. Irrational fear can paralyze gymnasts and has no basis in fact.

Fear leads to a lack of trust in your skills–you can’t just let it happen–like in practice.

Think of the development of any skill… When you are first learning the skill, it takes a lot of trials…

Soon the skill becomes easier, to the point where you become proficient performing the skill regularly in practice–you can trust your self to do it…

Then you learn how to perform the skill in competitions…

You may have some bobbles but if continue attempting the skill, soon enough, you become proficient in performing the skill in competitions.

If you allow fear to win out, not only will it prevent you from achieving your potential, you will not enjoy gymnastics to the degree you can.

Try these tips to manage your fear:

Remember, you have the skills to execute the still as you have shown in practice day in and day out. Now you have to let go and give up trying to over control the skill.